The Pharos were a band from La Puente, CA. To queries posted at a forum at Surf Guitar 101.com, Tony Ibarra, the band’s bassist (“I joined in summer of 1964 and for personal reasons left the Pharos to join another band) identified the other band members as Cesar Aliviado (lead guitar); Danny, rhythm guitar; and Gregg, drums. He does not name the sax player on the band’s 1963 obscure surf classic, “Pintor,” but does explain the tune’s origin: “‘Pintor’ is an old beautiful Mexican song (“Angelitos Negros”) that Cesar used to play all the time. He also used to play “Malaguena” and some other instrumentals. I guess his family used to be a lot into Mexican music, and I guess that is how he picked that number up; his family was from the Philippines.”

The Dakotas, ‘The Cruel Sea’

American rock ‘n’ roll fans of a certain age know the Dakotas as the backing band for British Invasion sensation Billy J. Kramer (“Little Children”). The group’s name arose from an engagement at the Plaza Ballroom in Oxford Street, Manchester. Its manager asked the group to return the next week dressed as Indians and called themselves ‘Dakotas.’ The group’s history, though, dates from September 1960, when rhythm guitarist Robin MacDonald formed the group with Bryn Jones on lead guitar; Tony Bookbinder (also known as Tony Mansfield) on drums and Ian Fraser on bass. Ray Jones joined the band as bassist replacing Ian Fraser, and Mike Maxfield joined the band in February 1962 as lead guitarist replacing Bryn Jones after being with a Manchester band called the Coasters. The group first backed Pete MacLaine (February 1962-January 1963). However, Brian Epstein, who was managing Billy J. Kramer, made the Dakotas an offer to become Kramer’s backing band, which they accepted. Epstein insisted the name was ‘Billy J Kramer with The Dakotas’, not ‘and.’ The group and Billy J Kramer then went to Hamburg to perfect their act. In addition to backing Kramer on his hits, the group recorded on its own and had one Top 20 hit, ‘The Cruel Sea,’ a Maxfield composition that reached #18 on the U.K. charts in July 1963. Re-titled ‘The Cruel Surf,’ it was recorded in the U.S. by The Ventures.

The Atlantics, ‘The Good, The Band and The Ugly’

This is the Australian surf band’s contribution to the 2002 album For a Few Guitars More: A Tribute to Morricone’s Spaghetti Western Themes. It’s one of the oddest surf music albums extant, and completely irresistible.

The Atlantics were founded in 1961 with a lineup of drummer Peter Hood, bassist Bosco Bosanac, Theo Penglis on lead and rhythm guitar, and guitarist Eddy Matzenik. Matzenik was replaced by Jim Skaithitis while the band was still in its earliest stages. The band’s claim to fame was as Australia’s most successful of the genre. Most well known for their classic hit, ‘Bombora,’ their later recordings such as ‘Come On’ are examples of 1960s garage rock. They were the first Australian rock band to write their own hits. In 2000 the group reformed with three of the original members, and continue to release new material and perform in concert. In 2013 the group celebrated the 50th Anniversary of their first album, Bombora, and the eponymous single that was their first to chart. A European tour was organised to mark the occasion. The album regarded as their classic is Flight of the Surf Guitar.

A U.S. promotional pressing of the Atlantics’ 1963 Australian hit.

The only info we could uncover about this contemporary band is in repeated references to its being “spooky.” One of the group’s other popular songs is “Werewolf.”

Hawaii Samurai, ‘The Shape of Surf to Come’

Again, a group that seems to prefer relative anonymity. The surf rock band was formed in France in 2005, and ‘The Shape of Surf to Come’ is the title track of an album from that year. The band’s website is in French with no English translation offered. It mentions a reunion show of the Voodoo Surf trio and offers an exclusive vinyl edition of Hawaii Samurai’s first album, Let There Be Surf. There are photos galore, some videos and a shop as well, but no band member names anywhere. Zut alors!

Hailing from Albuquerque, NM, The Surf Lords are Tom Chism (guitar, vocals), Mike Fleming (drums), Joe Silva (bass), and dancers Jeorge Mercedes and Amy. The band has released three albums: Makin’ Waves, Shark Attack (from which the above tune is extracted) and Voodoo Surf Fever, all available C.O.D. from the band’s website. The band has dates coming up in August in New Mexico and Colorado; the schedule is here. E-mail the band at thebeat@surflords.com.

Writing at Fat City Cigar Lounge, September 8, 2009, Roger Moser, Jr. had this to say about Swedish surf rockers The Surfin’ Gorillas and the band’s latest album, The New Adventures of the Surfin’ Gorillas: “Hot diggedy dog, The Surfin’ Gorillas are undeniably, unarguably the big kahunas of sizzlin’ surf-rock musical madness in today’s uninspiring world of predictable contemporary pop-saturation! They incite, they inspire, they arouse, they exhilarate, they damn well drive me ape! They cacophonously conjure a more innocent era (the dawning days of the pre-Fab Four 1960s) when endless summers seemed to forever run rampant along the sun-splashed shores of California; when golden-haired bronze-tanned beachbums and their bikin-clad babes blissfully basked in the euphoric joy of their wide-eyed youth; when groovily painted dune-buggies wildly careened through the glistening scorched coastal sands; when the roaring warmth of late night bonfires on the beach inspired weeny-roasts and frolicking teen-aged hanky-panky; when the sultry carousin’ sounds of The Ventures, The Champs, The Chantays, and The Surfaris (all of which are given a hearty run for their money by these here Surfin’ Gorilla characters, by the way!) robustly blasted from many a static-ridden low-wattage AM radio. Man oh man, this is an aurally awe-inspiring and skillfully crafted jaunt into all-out ear-titillating pleasure: low-rumble skull-rattlin’ bass, salaciously juicy saxophones, brawny big-bad-daddy drum poundings, wipin’-out tide-tumblin’ guitar riffs ragin’ with frenzied wave-crashin’ swagger, and the occasional injection of hot ‘n’ bothered wavy-gravy vocals ala Jerry Lee Lewis, Lux Interior, and Evan Johns (all that, plus a couple of cool crazed covers includin’ The Sonics’ ‘Strychnine’ and The Cramps’ ‘Bikini Girls With Machine Guns’). Woweee, surf’s up! So c’mon, gang! Grab your well-scrubbed boards and ride the big one with The Surfin’ Gorillas.”

The Fathoms, ‘Fathom This’

Not much info on this band, except that it formed in Cambridge, MA and two of the group members are Frankie Blandino and Jerry Miller, guitarists both. An online publication called The Continental features an undated interview with the band in which Frankie is asked what groups the band is into. His response: “We’re into a broad spectrum of music. For instance, John, Stan, and I have a rockabilly trio called the Cranktones. We also have an R&B band called Jumpin’ Bones with Dave on sax. Then we have a western swing boogie type band in which I play steel guitar, John on bass, Stan on drums, Allan ‘The Undertaker’ Sheinfeld on vocals and rhythm guitar, and this guy Jerry Miller, a complete monster on guitar and five string electric mandolin. So I guess you could say we’re pretty much into American roots music, besides being big surf music fans. We all dig The Astronauts, The Lively Ones, Eddie & the Showmen, The Rumblers, and of course, The Ventures, Dick Dale, etc. Oh yeah, we’re also really big on British Invasion music and we’re all big fans of a band from Scotland called The Kaisers.” 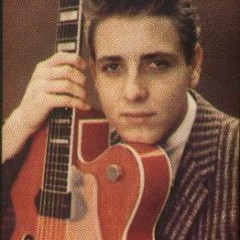 A Most Happy Fella Indeed