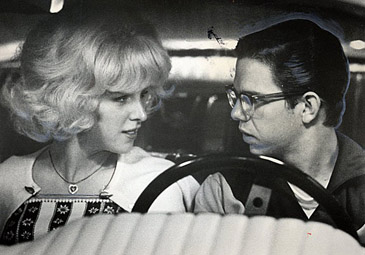 Ed. note: Upon its release in 1973 American Graffiti received almost unanimous critical praise, and launched several significant film careers, not the least being that of director George Lucas.

But that was 1973, and we wondered how an informed critic from the Millennial generation would view the world and the people depicted in Lucas’s film. To that end, we offer the following astute review by Australian blogger Thomas Caldwell, posted in 2011 on his website, Cinema Autopsy, which turns out to be replete with similar such insightful reviews and discussions. We recommend readers get acquainted with young Mr. Caldwell and visit him often.

‘Stand by for justice!’: Disemboweling the cop car

At first glance American Graffiti appears to be a nostalgia trip back to the early 1960s, the teenage years of its now legendary filmmakers–producer Francis Ford Coppola who at the time had just directed The Godfather and writer/director George Lucas who would go on to create the Star Wars franchise. Made in 1973 and set over one summer night in a small town in California in 1962, American Graffiti depicts the adventures and misadventures of a group of teenagers on the brink of adulthood. Upon closer reflection the movie casts a bitter/sweet shadow over a time of perceived innocence, suggesting that the ideal of a simpler way of life was just a front for a far bleaker and cynical reality. It’s one of the all-time great feel good films, but its sly cultural commentary is what makes it the masterpiece that it is.

In many ways American Graffiti set the template for the coming-of-age teen film. The characters are all distinctive types and the film is set over just one night, where the revelations that the characters experience have a profound impact on how they view themselves and their place in the world. The four main characters are the nice guy Steve Bolander (Ron Howard), the tough drag-racing guy John Milner (Paul Le Mat), the awkward nerdy guy Terry ‘The Toad’ Fields (Charles Martin Smith) and the slightly whimsical Curt Henderson (Richard Dreyfuss).

At the prom, Flash Cadillac & the Continental Kids tear it up on ‘At the Hop’ and get mellow on the soundtrack’s only original tune, their own ‘She’s So Fine’

‘Oh, boy. You don’t remember anything, do you?’: The prom dance with Steve (Ron Howard) and Laurie (Cindy Williams, set to the Platters’ ‘Smoke Gets In Your Eyes.’

Over the course of the night all four characters are either revealed to the audience in a new light or see the world around them in a new light. Steve’s treatment of his high school sweetheart Laurie Henderson (Cindy Williams) suggests that under the small-town politeness and boyish good looks he is not such a nice guy, while John is shown to be a bit of a softy. More importantly John realizes that by becoming the king of the road he faces a future of either being eventually usurped by a young challenger or forever being a big fish in a small pond. While Terry learns the more conventional lesson that being himself is enough to impress a girl, it is Curt’s story that is most interesting.

‘I just saw a vision. I saw a goddess.’: The blonde in the T-bird (Suzanne Sommers) captures Curt’s (Richard Dryfuss) heart

‘The Wolfman is everywhere’: Curt meets the Wolfman

Curt has the most reason and opportunity to break free from the path set out for him. Unlike Steve, who was presumably always destined for college, Curt seemingly would have been destined to remain in his childhood town with John and Terry if he hadn’t earned a college scholarship and therefore his ticket out. On the eve of his departure he is nervous and anxious about leaving, making his night a journey of self-discovery to assess what he should do. While hankering for the past and developing an impossible and intangible obsession with a mysterious blonde woman in a Ford Thunderbird, Curt finds fewer and fewer reasons to stay. Like Truman in The Truman Show, Curt sees behind the scenes for the first time and it changes his entire worldview. His teenage years are over now that he can see that the world is much less glamorous, noble and exciting than it once seemed.

‘I figure with bears, though, it’s me or them’: Toad (Charlie Martin Smith) puts the moves on Debbie (Candy Clark), to the tune of the Flamingos’ ‘I Only Have Eyes for You’

Candy Clark, Debbie Dunham in American Graffiti, recalls her audition for and working on American Graffiti. Part 1 of a two-part video shot by Mark Groesbeck, author of the history of Mels Drive-In featured elsewhere in this issue and of Kip’s American Graffiti Blog, on the 35th anniversary celebration of the film’s release. This event took place at the State Theater in Modesto, CA, in June 2008.

Part 2 of Mark Groesbeck’s video of Candy Clark reminiscing about her role as Debbie Dunham in American Graffiti on the 35th anniversary of the film’s release.

The car has long been a symbol in American cinema for freedom and status, and in American Graffiti cars play a very important role in the lives of the characters. Cars are status symbols to admire, they are used to assert dominance when revved at traffic lights and they can take the characters out of town to secluded spots for make-out sessions. As the cynicism begins to creep into the film images of car crashes increasingly become a fixture in the film in dialogue, setting and storyline to once again indicate a dying mythology for both youth and America in general. As the lyrics ‘We’ve been having fun all summer long’ by The Beach Boys fades over the film’s final credits, it is difficult to shake off the sad feeling that now that summer is over the fun is over too. It won’t ever be the same again and now the characters have little to look forward to other than mediocrity or worse.

‘I saw the beginning of the ‘60s as a real transition in the culture, because of the Vietnam War and all the things we were going through, and I wanted to make a movie about it’: George Lucas on the inspiration for American Graffiti, and the influence of Fellini’s I, Vitelloni on his conceptual thinking.

American Graffiti functions as a final farewell to childhood dreams before reality steps in. The main sting in the tail is that the film also signifies the end of the post-WWII American Dream. It is especially telling when Curt is teased about his ambition to one day shake hands with President John F Kennedy. Audiences now and in 1973 will recognize that Curt will never fulfill that ambition as a year later Kennedy would be assassinated.

For the most part American Graffiti is a joyous and frequently very funny vicarious night in the life of a likeable group of characters. The film’s multiple intersecting narratives and exhilarating constant use of diegetic music (heard by the characters in the film as well as the audience) create a wonderful sense of time and place. American Graffiti has lost none of its charm or energy, making it one of the many great masterpieces of the New Hollywood era.

The original trailer for American Graffiti 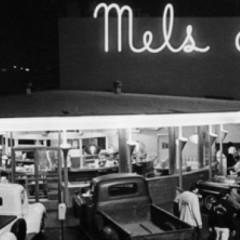 Mels: The True Story Of The World’s Most Famous Drive-In (Part 1)