IN SEARCH OF THE MIRACULOUS

The Louth Contemporary Music Society’s new CD, with an image of Gurdjieff on the cover, is as adventurous as ever, containing piano pieces by Fazil Say, Alan Hovhaness and Siobhán Cleary, vocal pieces by Vache Sharafyan, works for string ensemble by Rabih Abou Khalil and John Surman, and a two-guitar work by Say and comes without notes to explain the rationale of the musical choices. The music, recorded with close-focused, grainy immediacy, is full of oriental inflections, and the one piece without a descriptive title, “Cleary’s Chaconne,” an Irish piece replete with sometimes disturbing ruminations, somehow fits into the overall atmosphere.

At the core of In Search of the Miraculous is a search for unity. The album’s various and varied parts come from locations as distant from each other and as disparate as Lebanon and County Sligo in Ireland, but they share a certain passion to excavate deep into the musical material, as if to reveal its inner spirit. In this enchanting new album, distant musical cousins–both composers and performers—are brought together to reveal their common ground as much to complement each other through contrasts.

Consistent with the intertwining of musical threads throughout the compositions, the In Search of the Miraculous recording brings together a collection of instrumental and vocal performers from Ireland, England, Russia and Greece, and all of the highest caliber.

Armenian-American composer Alan Hovhaness’s sonata, ‘To Hiroshige’s Cat,’ from In Search of the Miraculous

The EQ Ensemble, comprised of some of Ireland’s finest string players, strikes a balance between formal restraint and ecstatic release in works such as “Mimosa” and “Leylek Geldi,” by the English saxophone player and composer John Surman, or in Lebanese composer Rabih Abou Khalil’s soaring “Dreams of a Dying City,” which itself evokes its composer’s celebrated oud playing.

The Russian pianist, and now Dublin resident, Elisaveta Blumina brings both strong statements and mere whispers to the album, from the declamatory first chords of Turkish composer Fazil Say’s “Black Earth” to the Armenian-American Alan Hovhaness’s expansive work “To Hiroshige’s Cat” and Sligo-based composer Siobhán Cleary’s reflective, searching “Chaconne.” We glimpse a different side to Fazil Say in his work for two guitars, “Princess of Lykia,” deftly performed here by John Feeley and Pavlos Kanellakis.

Fazil Say, ‘Black Earth,’ live in Frankfurt, Germany, November 10, 2012. This composition is one of two Say works featured on In Search of the Miraculous.

The revered English vocal group the Hilliard Ensemble provide a different shade entirely, with the mysterious and captivating works of Vache Sharafyan from Armenia. Helped by the measured intensity of the Hilliard’s voices, as well as subtle, almost concealed, electronics, Sharafyan ellicits a beguiling texture in which the text of “The Sea of Our Life is Troubling Me” is magnified through song.

In Search of the Miraculous is the latest release from the Louth Contemporary Music Society, a small, hardworking music organization that has engaged an enthusiastic new audience with its richly ambitious programming, bringing inspirational musicians such as Arvo Pärt, Philip Glass and John Zorn to the East Coast of Ireland over the last seven years. The new album follows four previous discs released by the Society, each extremely well-received. A Place Between, Path, Night Music and Metamorphoses likewise featured premiere recordings, by composers such as Sir John Tavener, Henryk Górecki, John Cage, Arvo Pärt, Alexander Knaifel, Valentin Silvestrov, Sofia Gubaidulina and Dmitri Yanov-Yanovsky. –Michael Dervan, The Irish Times Review, 1 February 2013

The spirit of George Gurdjieff infuses In Search of the Miraculous, a crowd-pleasing new recording released by the Irish concert promoter, Louth Contemporary Music Society.

It’s not just that the image of the twentieth century Armenian-born mystic graces the album’s cover and that the recording shares its title with a seminal book about Gurdjieff’s teachings by his acolyte, the Russian philosopher P. D. Ouspensky.

Fazil Say’s demo recording of his composition ‘Princess of Lykia’ for two guitars, as featured on In Search of the Miraculous, where it is performed by John Feeley and Pavlos Kanellakis. Video posted at YouTube by Fazil Say.

Intriguingly, the recording’s trio of solo piano works–“Black Earth” by the Turkish composer Fazil Say, “Chaconne” by Siobhán Cleary who hails from Sligo, Ireland, and “To Hiroshige’s Cat” by the Armenian-American composer Alan Hovhaness–share qualities with many of the piano pieces that Gurdjieff himself co-composed with Thomas de Hartmann–namely, sparse textures, jazz harmonies and Oriental scales. The Russian pianist Elisaveta Blumina performs these works with a Romantic yet restrained touch reminiscent of the piano playing of George Winston.

The highlight of the recording is the collaboration between the Hilliard Ensemble and composer Vache Sharafyan. The acclaimed English vocal group brings an intense and ecstatic sensibility to two harmonically vibrant works by the Armenian composer–“Ter, vor i mej le-rinn (Lord who makes the spring run from the mountain stones)” and “Tsov Kentsaghuis (The sea of our life is troubling me…).”

In Search of the Miraculous is part of a long line of contemporary music endeavors such as Yo Yo Ma’s The Silk Road Project devoted to celebrating and finding points of connection between disparate musical–and spiritual–cultures. Gurdjieff certainly makes for a fitting figurehead for this type of work. –by Chloe Veltman, Writer & Broadcaster, February 18, 2013 at www.chloeveltman.com 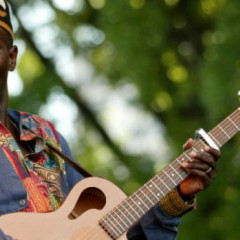