The title track of The Roys’ new album closes out the long player on a jubilant note, with an eager vocal from Lee Roy enthusiastic harmonizing from Elaine Roy, aided by some hot pickin’ (Randy Kohrs is on dobro—need any more be said?) and fiddlin’ (Clint White), and it’s the rare musician-on-the-road song that doesn’t speak of the draining travel, bad food and dodgy lodging. Written by Lee Roy with Morry Trent, it speaks of musicians embracing the troubadour’s life “because music’s in our blood,” and adds, “we can’t stay too long but we’ll hope you’ll have us back/our jobs ain’t done if you ain’t wantin’ more.”

If The Roys’ 2011 Lonesome Whistle debut and 2012 EP New Day Dawning proved anything, it was that these gifted siblings thoroughly enjoy making music on and off the road. But “Gypsy Runaway Train,” as pleasant a toe-tapper as it is, is the least of the new album’s original and cover songs. This is true for the simple fact that since last we heard from Lee and Elaine, misfortune has visited and presented them with a true annus horibilis. Elaine and her husband divorced and the resulting upheaval and confusion informs three wrenching songs she wrote for the album, and sings with a palpable ache in her delivery. Lee lost his father-in-law, clearly a giant of a moral man who was the best kind of role model for his family. Lee honors him with “Another Minute,” a sweet, melancholy bluegrass ballad with a loping rhythm; tasteful, yearning atmospherics from Randy Kohrs, fiddler Andy Leftwich and Justin Moses crafting elegantly understated banjo support; and a heartfelt vocal by Lee with warm harmony from Elaine, conveying a set of his finest, warmest lyrics expressing what so many have felt upon the loss of someone important in their lives: “What I wouldn’t give for just another minute to be with him.”

The Roys, ‘You Can Count on My Love,’ from Gypsy Runaway Train (written by Elaine and Lee Roy with Arlis Albritton)

But Elaine’s original songs are the album’s big story. No one would wish her fate on anyone, and a lot of people have obviously been through the same ordeal, but the woman who harmonizes so fervently on the title track about how much she and Lee enjoy playing music for folks clearly found solace in that very same music as she worked through her misery. She might’ve let her astonishingly wounded reading of Johnny Bond’s heartbreaker, “I Wonder Where You Are Tonight,” on which Matthew Downing’s lonely banjo plucking is a subtle but piercing effect, say it all for her but the keening, Dolly Parton-like mountain cries she emits wouldn’t suffice to limn the magnitude of pain she was dealing with. You might say the same thing about her take on Dolly-Emmylou-Linda’s (Trio) “Those Memories of You” (first recorded by Bill Monroe and also memorably covered by Pam Tillis ahead of the Trio version), in which the song’s bustling pace is a platform for Elaine’s scalding confession of being haunted by an old love. No, the two telling songs here are her fierce, near-desperate “You Can Count On My Love,” the album’s first song (a co-write with Lee and Arlis Albritton), in which she asserts her commitment to stay by her man’s side and assures him “leavin’ never crossed my mind.” Check out the little hitch in her voice at the end when twice she sings “baby, you can count on my love,” and rises just so on the word “count,” in a way that’s just a little too emphatic to be credible—she knows what’s coming. Which sets up her later song, “Half of Me,” a powerful, moving chronicle, very Alison Krauss-like both in the eerie, haunted cry in Elaine’s voice and in the sustained beauty of the band’s low-key but smoldering backing. It’s the story of a woman trying to regroup from her heart being shattered “in a million pieces,” to the point where she feels frightfully diminished, broken, gasping for breath, struggling to find a healing place. Kohrs (dobro), Moses (banjo) and Leftwich (fiddle) establish the moody backdrop; Elaine and Lee dig in on arguably the most moving sibling harmony singing they’ve yet committed to disc, so searing and scarred you can feel how close to the bone this song cuts for them.

Lee Roy’s tribute to his late father-in-law, ‘Another Minute,’ from Gypsy Runaway Train

Despite the very personal pain animating these songs, Gypsy Runaway Train has its lighter moments, and even uplifting ones—a solid, deeply felt, uplifting bluegrass gospel song of salvation from Lester Flatt and Earl Scruggs with fine, to the point solos from Lee (mandolin), Matthew Downing (banjo) and Clint White (fiddle) enhancing Elaine’s measured testimony; Elaine and Lee nod a second time to Bill Monroe with a spirited rendering of “Blue Moon of Kentucky” modeled after the uptempo version Big Mon cut after hearing Elvis kick out the jams on his first Sun single; Lee offers some self-effacing humor in his strutting “Workin’ On It,” a cataloguing of all his many flaws he’s determined to correct—“I’ve got a long list of things I’ve got to fix,” he confesses, “I ain’t gonna quit/bit by bit I’m workin’ on it”—with the song’s upbeat mood bolstered by the energetic discourse courtesy the heated soloing of Kohrs, Leftwich and Moses; the sister song to “Workin’ On It,” quite literally, is Elaine’s “Enough for Me,” not a jovial to-do list of self-improvement but rather a sober, determined vow to make each day, and herself, better—I want to make an honest living that’s taking and more giving/love with all my heart and not hold back/I never want to take for granted/the gift that I’ve been handed/because I have everything I’ll ever need/that’s life enough for me.”—in anticipation of a heavenly reward on down the line in this gem of a bluegrass ballad with a smattering of pop inflections in its melody and arrangement, which is something of a Roys trademark. And for good measure, the Roys also serve up a delightful bluegrass-ified treatment of Merle’s “Ramblin’ Fever,” fueled by Lee’s muscular vocal and Elaine’s keening harmonies.

Thus Gypsy Runaway Train, a stone-cold winner for The Roys, in which ample evidence is presented to prove them still on an upward arc as singers and songwriters. No one would wish their experiences of the past year on anyone else, but they’ve transformed misfortune into art. All aboard! 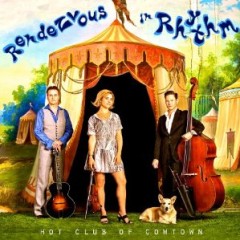