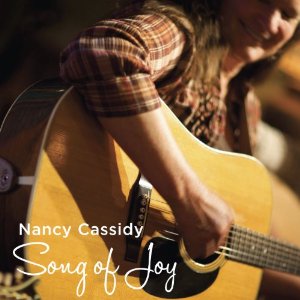 It arrived without forewarning, in a boxy envelope that immediately identified it as a CD, like so many others that show up in my mailbox. This, however, was the rare envelope without a label but rather hand-addressed, and the name in the top left corner above the return address was “Nancy Cassidy.”

Could it be that Nancy Cassidy? The same folk artist who has sold something like five million copies of her delightful KidsSongs CDs? The same Nancy Cassidy who writes so tellingly of what goes on in the hearts of men and women who dare to engage life in all its complexities, romantic and otherwise, as she did so memorably when last we heard from her, on 2009’s Runaway Train (reviewed in the February 2009 issue of TheBluegrassSpecial.com)?

Yes, it was that Nancy Cassidy, and with her new CD, Song of Joy (a deceptively cheery title that would soon take on much greater meaning and poignancy), she included a note written in her own elegant hand: “I wrote these songs for a friend of mine who had a brain tumor…”—a revelation that hits home with added force when the first lyrics she sings, on “Every Day,” the easygoing shuffle that opens the album on a soothing note, “Every day is a miracle, that’s what it is, that’s what it is/keep searching for something better/is there something better than this, oh, oh…” Miracles, in fact, and probably not by accident, are a presence on Song of Joy, as a tangible entity we can summon with faith, both in the power of a miracle and in each other. In the yearning country strains of “Miracles,” the husky-voiced Cassidy sings earnestly in what sounds like the fulcrum on which this album turns in coming to grips with mortality: “I’ve been trusting in miracles/and the strength of our hearts…miracles are everywhere/lovin’ is the key…”

No doubt Song of Joy can be interpreted in different ways, depending upon the listener’s circumstances. For all the world, yours truly, who knows about losing dear friends in a sudden twist of fate, hears it as the artist’s account of finding her balance in the wake of devastating personal news. No, it’s not all about her while it’s her friend who’s suffering. But it is about her love for her friend, the strength she gains from that love and her hopes of returning it in kind. She is strong (“Every Day”); she is weak (“Savior Next to Me,” about which more later); she is humbled (the delicate folk strains of “Your Sun and Moon” inspire the beautiful emotional outpouring of “I can’t get enough of you/I thank this sunlight/I thank you”); she is philosophical and poetic all at once (as in the warm sentiments of “Let Peace In,” a hymn-like beauty graced by Dayan Kai’s church-y piano and delicate nylon string guitar fills, when she offers an emphatic “we can heal it all/find a loving place in our souls/let peace in, let it in/my sweet friend” that in one fell swoop offers wise counsel and restates one of the album’s animating ideas); she is celebratory (the bluegrass gospel of “What a Glorious Thing”—another occasion for Dayan Kai to shine, this time with a frisky mandolin solo—in which she exults in the spiritual ecstasy her faith ignites, singing, with sturdy harmony support from Keith Greeninger, “When faith in my heart like a new day swells/good will fills the well/what a glorious thing to drink from that well/when faith in my heart swells/ When hope pours down like rain from the sky/a spirit starts to fly/what a glorious thing it is to fly/when hope pours down from the sky.”)

Audio clip: Nancy Cassidy, ‘So Beautiful,’ from Song of Joy

Vulnerability, too, rears its head here. The lilting “Savior Next To Me” has a slightly tropical feel in its graceful rhythm and bright melody but that’s tricky stuff, as it turns out. Her disposition even-keeled, rather matter of fact, Cassidy queries, “Can I hold your heart next to mine?/Won’t you pull me out of the churning sea?/Will you light a fire/Hold me ‘til I’m free/I need a savior next to me” This sounds like it must be the voice of the afflicted reaching out for support; indeed it may be, if we agree the afflicted in this case is the singer herself, so aggrieved by the circumstances in which she finds herself that she’s the one seeking an elusive existential peace.

It’s fitting, then, when Cassidy closes with the subdued but uplifting assurance of “You Are Not Alone,” itself a kind of midtempo country church hymn in which Cassidy and the subject who inspired these ruminations are united in purpose, forging ahead with new resolve, their love secure and a fount of strength, with “hope and joy and freedom’s light in our hearts.” By this time it’s clear that hope, joy and freedom’s light mean very different things to the principals in question but Cassidy’s comforting voice rings with certainty when she asserts, “we’ll find a way to make things right,” before she signs off amid a swirl of electric guitar, drums and velvety harmonizing voices with “hope and joy and freedom’s light/we’ll be alright,” again, and again, and again, until the voices and music fade to silence, signaling not the end of the album but rather the resilient spirits continuing their journey as one. Just over the horizon, out of sight, beyond the ear’s reach, love, like the road, goes on forever.