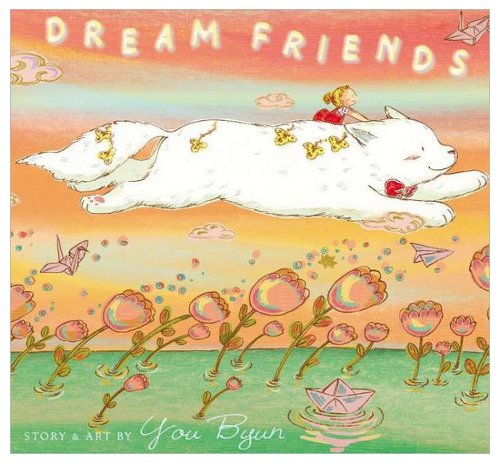 Nancy Carpenter is quickly becoming one of my favorite illustrators. And in her latest illustrated title, Eva Moore’s Lucky Ducklings (Orchard Books, February), what is described as “a true rescue story,” she renders her illustrations via charcoal and digital media, the former being a medium I love to see used in picture books (and which she does very well).

I think it’s safe to say that Lucky Ducklings will be one of 2013’s great picture books, though it’s still early in the year. This book works on every level, and I don’t think it’ll meet many children it won’t straight-up delight.

An opening copyright-page note states, “This is a true story about a mama duck and her five ducklings.” The story then opens with: “The Duck family lived in a pretty pond in a green, green park, in a sunlit little town at the end of a long, long island.” Mama Duck and her ducklings are heading into town for a walk:

Fortunately, someone spots them (the illustration opening this post), because later, on their way over a storm drain grate, each duckling falls through the slats and down into the great-underneath below. “Oh, dear!” writes Moore. “That could have been the end of the story. But it wasn’t, because …” (This is a repeated refrain in the book—”that could have been the end of the story, but…”—and it goes far, without ever being annoying, in propelling the story forward.) Since someone had seen what had happened—the friendly tollbooth worker, that is—the fire department is summoned, and help is on its way. 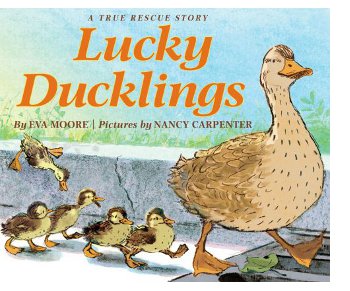 The kind, concerned community works together to retrieve the baby ducklings and reunite them with their mother. Carpenter occasionally plays with perspective, such as showing us the shocked humans’ faces peering down through the grate, as if we readers are the frightened ducklings looking up. We also see from that same point-of-view Fireman Paul climbing “down, down into the storm drain,” as the community—feathered and otherwise—waits to see what the outcome will be.

Moore writes with a rhythm both entertaining and soothing (”What a fine day for a walk! Off they went through the green, green park.”) Carpenter sets off Little Joe from the others; we already know he stands out, given he possesses the only name that doesn’t rhyme, but Carpenter shows him always last, always curious about his surroundings and falling behind.

Many times she breaks up spreads into panels to further differentiate the creatures, the first time being when they fall through the storm drain grate. (And notice the trash in the spread above? There’s a very subtle let’s-take-care-of-our-planet-already message here, a treat for observant readers.)

Though it’s a frightening notion for young children (to be separated from a parent, not to mention falling down, down, down through what appears to be a tiny space)—and they can easily relate here, given these tiny ducklings who are unintentionally separated from their caretaker—there’s still humor here. One never worries that the ducklings are harmed, and Little Joe (of course it’s Little Joe!) even looks as if he’s having fun with his fall, both webbed feet clinging to the sides, as if he’s swinging down. (I guess it’s arguable they didn’t even cluelessly step right through the cracks; perhaps they were just curious to see what was down there, peeking without realizing their entire bodies would fall through.) There’s a comforting humor, too, in Mama Duck’s fierce determination: “Whack! Whack!” she calls, once she discovers they’re missing. “Get away from my babies!” It’s here she clears the area of humans, as she spreads her great wings.

And it’s a delight to see Carpenter’s color palette at work here, opening the story with warm, cozy shades of green and yellow, which then get darker in hue as the story progresses, as the ducklings face danger. She wraps it all up with a beautiful final spread and closing illustration, once again back to the more soothing pastel shades, the greens of the grass and blues of the water.

The opening note states that this true-life event took place in 2000 in Montauk, New York. But if it all brings to your mind a certain Caldecott-winning book by Robert McCloskey, I wouldn’t be surprised. It does for me — and even includes a spread of a man with his arms extended and hands out, stopping traffic to let the ducklings cross the road. McCloskey’s was a cop; Carpenter’s, a fireman. But you get the idea. Is that spread a direct homage to the classic book? One wonders.

An appealing story that will resonate with many children. Picture book lovers (and especially McCloskey fans), don’t miss it.

This featured picture book is the work of a debut artist. You Byun grew up in the United States, Japan, and Korea and studied at the School of Visual Arts in New York City. Evidently, her work was awarded an SCBWI Illustrators’ Portfolio Award, as well as the Tomie dePaola Illustration Award.

Dream Friends (Nancy Paulsen/Penguin, February) tells the story of Melody, a young girl living in a new neighborhood and feeling very shy about making new friends. Readers don’t learn this till about, say, a third of the way into the book, though; before that we’re treated to her night-time romps with her “dream friend,” a giant white cat in a red bow tie, pretty much her only companion. In her dream landscape, she climbs a giant tower to meet the creature. They fly through the air over flowers as giant as the cat; he surprises her with gifts; they play games and see fireworks; and more. This happens nightly. 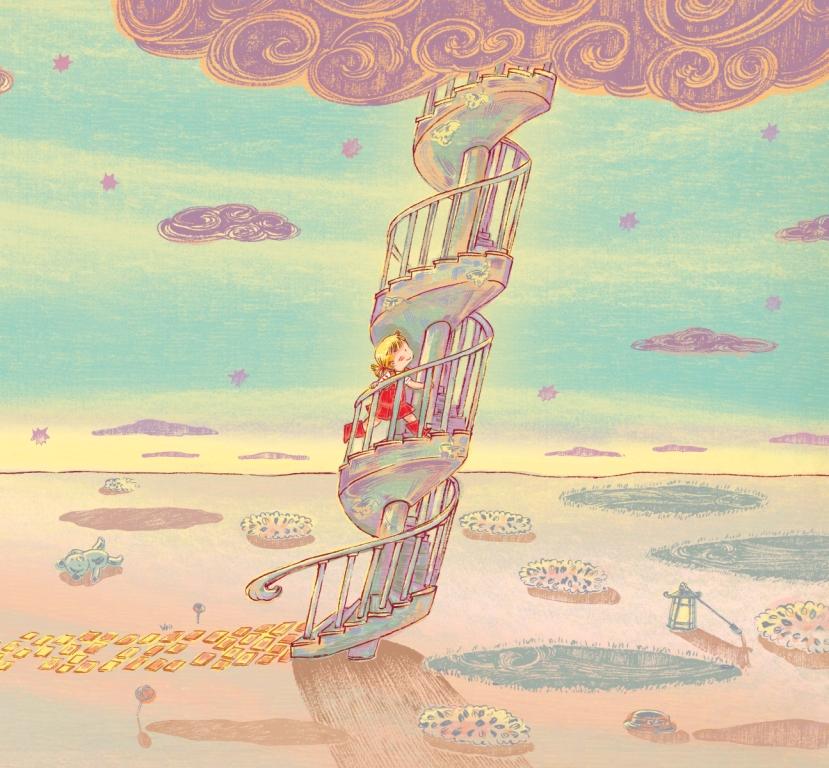 ‘Once there was a girl named Melody, and she had a very special friend …’ (Click to enlarge slightly)

Since she’s too bashful on the playground to introduce herself, she tries everything she can to coax the cat out of her dreams. It’s a funny sequence, this part of the book: She sets out a line of cupcakes that lead to the ladder of the tower (which leads to the bed where she sleeps), and she tries to smoosh his ginormous feline self through a door. All her stubborn attempts fail. Eventually, she does make a (human) friend and even gets to share her night-time companion, but I won’t give the entire story away.

Every review I’ve read of this picture book thus far makes particular mention of Byun’s distinctive artistic style, and perhaps you can see why in the few illustrations I have here today. The palette here is sunny, mostly pastels but with splashes of darker hues. Byun used ink and watercolors, manipulated digitally, to pull it all together. “It [reminds] me of the classic Goodnight Moon,” wrote Michael Agger at the New York Times in early February, “with its haunting, twilight-inflected color scheme.”

[T]his book could easily be billed as My First Acid Trip. In a good way! The drawings in this picture book debut enchant and enthrall and linger in the mind.

Did you catch my mistake? Yes, it’s the classic one of applying adult logic to a children’s book. I imagine most kids won’t give the fantasia of Dream Friends a second thought. Why wouldn’t a girl romp with an enormous cat in the night? Why wouldn’t fish fly in formation through a moonlit sky?

Indeed. The whole adventure is trippy, slightly surreal (well, to us grown-ups): Think cupcake- and donut-shaped fireworks, dancing on flowers, bowls of shooting stars, a bedroom that’s become a dreamscape-forest, birds who look upholstered, the girl napping on the monumental cat in the mushroom-filled forest. And more. It’s what the Publishers Weekly review calls “a diminutive paradise.”

I think Byun is definitely an illustrator to watch. There’s a lot more art here at her site.

DREAM FRIENDS. Copyright © 2013 by You Byun. Published by Nancy Paulsen Books/Penguin, New York. Illustrations used with permission of the publisher.