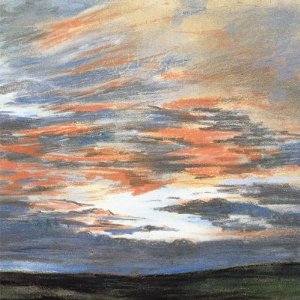 You can tell by listening to this album that his style has been carefully developed. It’s a very open and deep sound, and the notes have room to breath. Nothing is rushed or forced, the songs simply unfold in natural form and convince you they have been there all along. All in all it’s a beautiful record (or paintings), and very refreshing.

Those are the words of Kyle Fosburgh, a Bloomington, MN-based six- and 12-string guitarist of great potential, praising Richard Osborn’s album Giving Voice, Guitar Explorations. On his website, Fosburgh has a section called The Mine of American Music, the function of which is, as it says, “Unearthing the Lost Musical History of America & Featuring New Artists Who Are Leading The Way With New Ideas and Innovations.” Fosburgh is a young man of great faith and great talent, and is also humble and generous enough not only to remind his visitors of those artists who helped pave the path he now trods but also to tip his hat to gifted contemporaries that have left their mark on him.

The truth is, though, that Fosburgh’s insightful appraisal of Osborn’s creation happens to be a spot-on summation of his own new solo guitar album, The Traveler’s Journey, the successor to his debut, The Dreamer’s Eye (released in April 2012; The Traveler’s Journey was released in November 2012). (Note: In January he released a new track, “Wounded Knee,” which is available for purchase and can be heard in its entirety in the Recordings section of his website, along with several other new recordings, his new album and an EP, Guitar at Damp Camp.)

From The Traveler’s Journey, ‘The Redwoods,’ by Kyle Fosburgh

What Fosburgh tells us in The Mine of American Music on his website is that he is the offspring of many fathers, some of whom (notably Robbie Basho) are mentioned, whereas others are to be found in the ringing exultations and resonant, shifting textures of his guitars. You hear them in the soft chiming and striking pull-offs at the start of “The Dawning,” heralding new light extinguishing darkness on God’s green earth in tones sensitive and wondrous, much as Edvard Grieg expressed them in “Morning” from his Peer Gynt Suite. You hear them in the key changes and in the awestruck ruminations as he surveys “The Redwoods.” You hear them in the evocation of the challenging journey up the Himalayas, in the ringing, circular patterns, the percussive taps, the hint of a sitar, in “Journey Over Mountains.” You hear them, especially, in the short ride on a fast machine that is “On the Range,” a 1:43 sequel to “Journey Over Mountains” in which the landscape—broad, wild, wide, endless, untamed—beckons the traveler, whose excitement and trepidations are voiced in the anxious strums and trembling slide fills. You hear them, oh how you hear them, in the solemn, delicate, hymn-like evocations of new life in “Every Child Born” with the alternating textures of solid, muscular strumming and fragile, upper neck noting emulating a newborn’s first breaths. You hear them all, old masters such as Kottke and Fahey, and Fosburgh’s young fellow travelers such as Glenn Jones and James Blackshaw, daring young men of great soul and impeccable craft who reveal their deepest passions and anxieties alike without singing a word but instead painting aurally, on broad canvases, in strokes bold and cautious alike, creating new worlds and exploring big themes (Fosburgh says the songs on this album “tell the story of every individual’s quest for truth, and the obstacles and joys he/she finds along the way”), for a few precious moments and with a meticulously choreographed arsenal of strumming, picking, arpeggios, glissandos, chiming and tapping, and masterful control of overtones to create shadings imbued with the weight of text. No wonder Fosburgh, in the release he sent with The Traveler’s Journey, describes deploying the acoustic guitar “as a visual art medium.” (Despite the absence of vocals on this long player, Fosburgh does sing on some of his other recordings, and quite captivatingly, in a clear, sometimes quavering high tenor that at times sounds much like that of Jesse Colin Young.)

Kyle Fosburgh, ‘The Dawning,’ from The Traveler’s Journey. This short film, created by Fosburgh and his professional partner, filmmaker Ben Blegen, is being submitted to festivals and will be archived for a future DVD release.

Significantly, in the end, The Traveler’s Journey, for all its globe hopping, conjures images and the feel of the land Kyle Fosburgh knows intimately, that being the legendary plains of Minnesota. Just as his words of praise for Richard Osborn’s album, as noted at the outset, so succinctly and vividly describe his own new work, so do we turn to another writer’s description of a tallgrass remnant of the Minnesota prairie of yore, preserved in the Blue Mounds State Park, for a key to what Fosburgh has wrought on his new album, in which the land is a principal character. In his essay “Home on the Plains” on the Minnesota Department of Natural Resources Minnesota Conservation website, Chris Welsch captures the spiritual and natural wonder before him in vivid observations that also serve as the perfect capsule review of The Traveler’s Journey. To wit:

“There is almost always a breeze over them. . . . a far spreading verdure, relieved by a profusion of variously colored flowers; the azure of the sky above, or the tempest that can be seen from its beginning to end; the beautiful modifications of the changing clouds; the curious looming of objects between earth and sky, taxing the ingenuity every moment to rectify;–all, everything, is calculated to excite the perceptions, and keep alive the imagination.”

From The Traveler’s Journey, ‘The Ships Are Sailing Out,’ by Kyle Fosburgh

All of Kyle Fosburgh’s recordings, individual tracks and albums, are available at his website.