When the great J.D. Crowe announced 2012 as being his retirement year, the fate of his superb band the New South was put to rest fairly quickly with the announcement that Dwight McCall, Ricky Wasson, Mark DeSpain and Kyle Perkins would be joined by former Grasstowne banjo man Justin Jenkins in a new aggregate called American Drive. The group’s debut album, released this past October, is an unqualified winner that honors the high standard Crowe set for himself and his band and also establishes for American Drive a distinctive traditional bluegrass voice.

Faith and commitment are the predominant themes here, in songs from band members McCall and Wasson and top-flight songwriters such as Wayland Holyfield, Brink Brinkman, Pete Goble, Paul Clayton and others. As well, the tunestack offers some unsentimental tough numbers such as the moving Goble-Wasson co-write, “War is Hell,” a mountain-flavored story (its sorrowful mood enhanced by the mourning fiddle cries of Ron Stewart) of a battle-scarred veteran who brought the conflict home in his head and couldn’t win “the battles of his life”; “Nobody’s Child,” by Mel Foree and Cy Coben, has a lively stride about it, fueled by Jenkins’s bright banjo and McCall’s sprightly mandolin, but it’s told from the viewpoint of a blind orphan boy who always finds himself passed over in the adoption process–as the band sings in the beautifully harmonized choruses, “I’m like a flower just growing wild/no mommy’s kisses and no daddy’s smiles/nobody wants me/I’m nobody’s child.”

The blind boy in “Nobody’s Child” isn’t the only outsider in the American Drive spotlight. McCall’s brisk, strutting “Long Haul Trucking Man” honors those big-riggers “addicted to the road…alone behind the wheel,” the relentless pace of the job reflected in the urgent lead vocal and the spirited soloing provided by Stewart (fiddle), DeSpain (dobro) and Jenkins (banjo). Darker and more deliberate, Brink Brinkman’s “Son of a Miner” simply tells the story of three generations of miners, the son and grandson being “a chip off that old number nine/with coal dust on his hands/like his father before him/he would proudly take a stand…”) with the latter fated to die in cave-in–a slice of life from eastern Kentucky, non-judgmental, sung with pride and reverence, with Stewart and Jenkins adding suitably sober fiddle and banjo support.

The dour “Willow Creek Dam” is a sturdy howl of protest against the destruction of the land harboring the singer’s childhood memories (“So damn the man that dams up the river/Damn the man who drowned the life I’ve known/Damn the world that’s so ever changin’/for it robbed me of my Willow Creek home…”); the high stepping “Is It Too Late to Settle Down” is the urgent query of a drifter ready to curb his wanderlust and get serious with a gal he jilted in the past; and the affecting gospel numbers, “From Where I Stand,” a plaintive acknowledgement of God’s strength and mercy, and the soaring “Resting Place,” a vision of the afterlife the singer hopes awaits him, all combine to add textual heft to American Drive’s debut–eschewing throwaway songs and bringing its exemplary musicianship to bear on weighty topics adds up to a solid start for some fellows who took all the right things away from their apprenticeship with J.D. Crowe. American Drive sounds ready for the long haul. 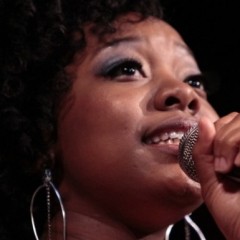