But no one would contest that as of that time, the 1950s, Chuck Yeager was at the top of the pyramid, number one among all the True Brothers.

And that voice… started drifting down from on high. At first the tower at Edwards began to notice that all of a sudden there were an awful lot of test pilots up there with West Virginia drawls. And pretty soon there were an awful lot of fighter pilots up there with West Virginia drawls. The air space over Edwards was getting so caint-hardly super-cool day by day, it was terrible. And then that lollygaggin’ poker-hollow air space began to spread, because the test pilots and fighter pilots from Edwards were considered the pick of the litter and had a cachet all their own, wherever they went, and other towers and other controllers began to notice that it was getting awfully drawly and down-home up there, although they didn’t know exactly why. And then, because the military is the training ground for practically all airline pilots, it spread further, until airline passenger all over America began to hear that awshuckin’ driftin’ gone-fishin’ Mud River voice coming from the cockpit… “Now, folks, uh… this is the captain… ummmm… We’ve got a little ol’ red light up here on the control panel that’s tryin’ to tell us that the landin’ gears’re not… uh… lockin’ into position…”

But so what! What could possibly go wrong! We’ve obviously got a man up there in the cockpit who doesn’t have a nerve in his body! He’s a block of ice! He’s made of 100 percent righteous victory-rolling True Brotherly stuff.

Thus one of many memorable descriptions of a true American original and hero, Gen. Charles Elwood “Chuck” Yeager, in his 1979 best seller The Right Stuff. In this passage Wolfe is explaining how all commercial airline pilots suddenly started sounding suspiciously like the unruffled Yeager, whom other fighter jocks lionized as the hot-shit All-American paragon of a pilot after he became the first human to fly faster than the speed of sound on October 14, 1947; in 1953, when Scott Crossfield broke Yeager’s record and became the first pilot to fly faster than Mach 2, Yeager climbed back into the cockpit (this time without the broken ribs he sported on his 1947 flight after falling from a horse; he was treated by a veterinarian, and could only seal the latch on his aircraft by means of a makeshift device—a sawed-off broom handle—his friend and fellow project pilot Jack Ridley came up with on short notice) and broke Crossfield’s mark with a speed of Mach 2.44. The right stuff, indeed.

Well, this week Gen. Yeager, long since retired and now a spry 89 years old, proved himself a nonpareil badass by recreating his first historic mission exactly 65 years to the day since his first supersonic flight, although his amazing feat was overshadowed by Austrian skydiver Felix Baumgartner’s supersonic skydive, which was witnessed by some five million viewers live on YouTube. Actually, Gen. Yeager being a self-effacing type, it was rather perfect that someone else would get all the headlines while he quietly went about doing amazing feats on his own.

On October 14, to commemorate the 65th anniversary of the day he became the first man to break the sound barrier, Yeager took off for altitudes more than 30,000 feet above California’s Mojave Desert at 9:45 a.m. in an F-15D fighter jet piloted by Capt. David Vincent, who was chosen for the assignment because of his flight record and rank–the same as Yeager’s when he made his first supersonic flight.

“This captain is as much of a maverick as General Yeager is,” Yeager’s wife Victoria said of Vincent in remarks to the Las Vegas Review-Journal. “He’s in the back seat where the instructor pilot sits because he’s the elder statesman.”

Yeager, who piloted for the rest of the flight, told reporters there was little on his mind as he took the stick just four months shy of his 90th birthday.

‘Flying is flying. You can’t add a lot to it,’ Yeager said.

For his derring-do at age 89, Yeager was honored as Badass of the Week by the website of the same name, which, after detailing Yeager’s unbelievable exploits in WWII, had this to say about the legend’s immediate post-war years:

But shit was just getting started for Chuck Yeager in terms of limitless badassitude and pushing-it-to-the-limit-ness. His experience as both a mechanic and a badass fucking fighter pilot got him attached to the Aeronautical Systems Flight Test Division back in the States, where his chief duty was to test-fly repaired aircraft to make sure they were airworthy–an exercise that was basically one step removed from playing Russian Roulette with an automatic pistol. During his tenure flying around in a bunch of “hopefully functional” airplanes, Yeager so greatly impressed his superiors with his amazing ability to not die in a giant flaming inferno that he was selected to test-fly the new rocket-powered experimental Bell X-1 prototype aircraft. This was a pretty big deal, since he was chosen from a field of 125 senior pilots with buttloads of flying experience, and he definitely lived up to the task. Even though he had broken two ribs the day before and was in so much pain that he could barely get the cockpit hatch closed, Chuck Yeager sat behind the controls of this giant flying explosion and prepared to do what no man had ever done before–break the sound barrier. On 14 October 1947 Yeager went completely balls-out full-throttle, hitting Mach 1.07 and becoming the first man to ever travel faster than the speed of sound, proving that it was possible, in fact, to travel that fast without having all of your internal organs disintegrate and turn into a thick disgusting soup (before this, scientists weren’t so sure). For his amazing fearlessness in the face of probably-certain death, he won the Congressional Silver Medal of Honor. To give you some indication of how fucking huge this accomplishment was, his MoH citation states that it is, “For conspicuous gallantry and a total disregard for his own personal safety.”

In the movie version of Tom Wolfe’s The Right Stuff, Chuck Yeager (Sam Shepard) breaks the sound barrier, with an assist from his friend and fellow project pilot Jack Ridley (Levon Helm) in closing the hatch on his aircraft, a task he couldn’t perform after breaking two ribs in a fall from a horse.

Some dude broke Yeager’s air speed record by busting out Mach 2 in 1953, but Chuck wasn’t the sort of total fucking badass who was going to roll over and die just because someone stole his claim to being the “Fastest Man Alive.” No, he sought vengeance pretty much immediately. A mere two months after his record was broken, Chuck Yeager hit Mach 2.44 in a Bell X-1A. He went so fucking completely over-the-top balls-out that immediately after he hit the fastest speed ever recorded, the plane went completely out of control, plummeting 51,000 feet in the span of 51 seconds (!!) but Chuck didn’t even blink. He just said, “Fuck you plane!”, pulled out of the dive mere feet from the ground, and flew back to safety. [Ed. Note: Actually, Yeager was 29,000 feet from the ground when he regained control, but in aviation terms that might be called “mere feet from…”] 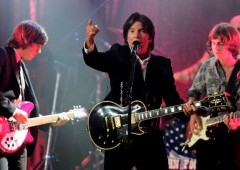