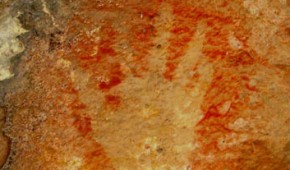 “Our story is in the land.

It is written in those sacred places.”

I gaze in wonder at the faded handprint on a rock cave wall here at Nourlangie, in Australia’s Arnhem Land. Who was the ancient aboriginal painter who signed his rock art in this unique way?

His right hand has been placed palm down against the rock surface with his fingers spread. A stream of red ochre paint was blown from his mouth onto the back of his hand to produce this stencil image. Part of the image of his index finger has been eroded, as have several of his other paintings on the walls of this rock gallery.

Early aboriginal people had no written language and their laws, cultural beliefs and creation myths were preserved through stories, dances, songs and paintings. Their long history of environmental and social change is found here in more than 5,000 rock art sites. Archaeologists have uncovered evidence of over 25,000 years of Aboriginal occupation within this area, and Kakadu’s rock art (gunbim) represents the longest historical record of any group of people in the world.

Kakadu National Park is a vast and timeless place–a landscape of exceptional natural beauty and diversity.  I love its stillness and intense colors. There are many regions here: mangrove-fringed coastal areas blend into expansive flood plains; low-lying hills are flanked by tall sandstone escarpments to the east and are interwoven between open bush woodlands and forest habitats. The park is teeming with wildlife in its waters, on the land and in the air. With the daily passing of the sun overhead and the changing of the seasons, the land also assumes constantly shifting forms and colors. In this context a knowledge and appreciation of nature is fundamental to understanding the culture of Kakadu and its people.

The Mimi spirits are fairy-like beings of Arnhem Land in the folklore of the indigenous people of northern Australia. Westerners would equate them with elementals and nature spirits. They are depicted as having thin and elongated bodies–so thin as to be in danger of breaking in case of a high wind. To avoid this fate, the Mimis spend much of their time living in rock crevices. As creation spirits, they are like humans but exist in a different dimension. It was the Mimis who first taught the people how to hunt, cook and paint.

Ochre was the most valuable painting material used traditionally by the people. Red ochre was available for mining from many sites, from crumbly to hard in texture rock, heavily colored by iron oxide. The rock was washed, then pounded into a pigment powder and blended with water, saliva, orchid sap or turtle egg yolks to create a sticky fluid paint. When a deeper ceremonial red color was desired, kangaroo blood was mixed into the pigment. Red ochre was particularly important as its use symbolized the blood of ancestral beings.

Ochre also comes in a variety of hues from yellow to dark reddish-brown and these ores lend a rich, warm color to the traditional rock paintings. Charcoal provided black pigment, pipe clay–a fine white river clay–was worked and moulded into small blocks to make white pigment. Thus haematite (red), limonite (yellow), charcoal (black), and pipe clay (white), expanded the artist’s palette. Ochre was also traded extensively across Australia, the precious commodity travelling many hundreds or even thousands of kilometres from where it was mined, to where it was used.

The traditional materials were applied in several ways. The oldest included blowing a fine spray of paint from the mouth to produce stencils or silhouettes on the rock’s surface. Paint was also applied directly to the rock by brushing it with a small crushed stick. Bodies were also painted using leaves, fingers and hands to beautify and decorate the participants for important ceremonial dances and songs.

In Arnhem Land bark and wood surfaces were also painted with great care using various brushes and styles for different effects. After covering a background with a coat of red ochre, the main forms of the design were outlined in black, yellow or white by using a brush made from a stick with fine grass or fibres tied to the end. Next a distinctive cross-hatched pattern is produced with a special fine brush made from a stick tipped with human hair tightly bound to it. The final step filled in the cross-hatched areas with white ochre, again using the hair tipped brush. The figure below is of Nabulwinjbulwinj, (nabul-win-bul-win) a dangerous and malevolent ghost spirit who ate women after striking them dead with a yam.

Because of its great age rock art can be damaged by natural processes. Rangers do what they can to remove or redirect these events by building boardwalks and handrails to prevent visitors from touching or rubbing the paintings. Silicon drip lines redirect water flow away from the paintings while the boardwalks prevent dust from becoming stirred up and coating valuable art. Occasionally a contemporary aboriginal artist, using traditional brushes and ochres, will repaint early art works to prevent them from fading. Just before his death in 1964, Nayombolmi, also known as “Barramundi Charlie,” repainted the following magnificent group picture.

The large figure at the top is that of Namondjok, (nar-mon-jock). He is a Creation Ancestor who now lives in the sky and can be seen only at night when he appears as a dark spot in the Milky Way.

To the right of Namondjok is Namarrgon, (narm-arr-gon) the Lightning Man. He creates the violent lightning storms that begin in November, during the north Australian monsoon season. The band around him from his left ankle, joining his hands and head, and down to his right ankle represents the lightning he creates.

Below him and to the left is Barrginj, (barr-jeen) Namarrrgon’s wife, painted in white with black outline and decoration. Beneath these three Creation Ancestors is a large group of men and women elaborately dressed and possibly on their way to a ceremony. Several women have dashes painted across their breasts indicating that they are breastfeeding.

Images both sacred and secular adorn the many caves here at Nourlangie Rock, often represented through the artist’s unusual perspective that views the images from above, while looking down on them. Painters from this area show a preference for open spaces with a concentration on the main figures where there is an expression of suddenly arrested motion.

Language, ceremonies, kinship and caring for the land are aspects of cultural responsibility that have been passed from one generation to the next. Aboriginals all believe that they do not own the land–rather the land owns them–thus the land and its people have always been linked. This spiritual connection, spanning tens of thousands of years, has been recognized globally in Kakadu’s World Heritage listing, which honours one of the oldest living societies on earth.

“Our land has a big story.

Sometimes we tell a little bit at a time.

Come and hear our stories and see our land.

You can come back.” 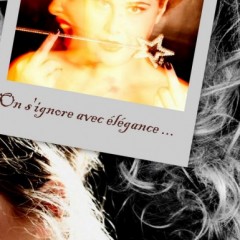